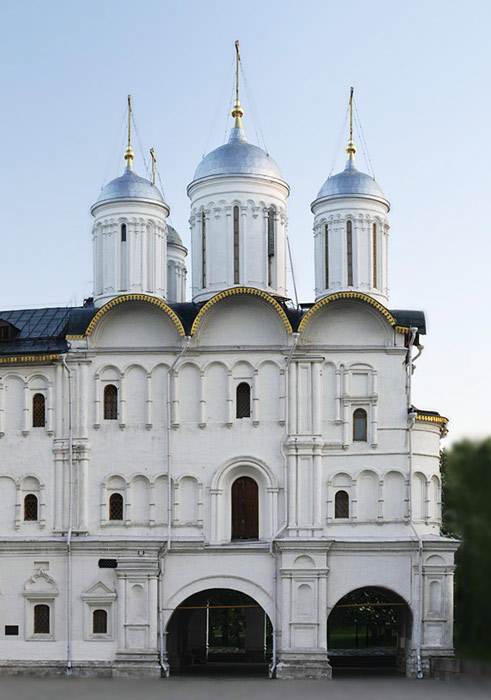 The private chapel for Patriarch Nikon was built in the ensemble of ceremonial premises of the Patriarch’s Palace by the end of 1655. As known from historical documents, the private church of Patriarch Nikon was decorated by the team of masters from Russia’s well-known art centres—Yaroslavl, Kostroma and the Holy Trinity and St. Sergius Lavra, headed by court talented icon-painters Simon Ushakov, Iosif (Osip) Vladimirov (Volodimerov) and Feodor Kozlov in summer and fall 1656. However, that time the Church wasn’t consecrated. Unfortunately, the original wall painting hasn’t survived until today.

Patriarch Joachim ordered to rebuild the Church. It was painted again, and consecrated in the name of the Twelve Apostles on 13 September 1681. The windows were made from mica, in the old way. It is considered that for the first time in the history of Russian Orthodoxy, the Crucifixion was put above the upper tier of the iconostasis.

In 1722-1724, the church was divided into two levels by a wooden ceiling; a Patriarch’s library was set up on the first floor. The renovated Church of the Twelve Apostles was provided with a new carved and gilded iconostasis; Peter Zherebtsov painted in oils the fresh plaster of the walls of the Church and Refectory.

In the mid-19th century, the wood deck was dismantled. The walls of the Twelve Apostles’ Church and Refectory were painted with oil-colours again, and a high carved iconostasis was installed to the full height of the church. The activities were led by architect Chichagov, who was realizing the Emperor’s order to make the church lighter—he enlarged the old windows and cut the new ones, as well as changed the exterior.

The Twelve Apostles’ Church, the Refectory, and the Chamber of the Cross were painted in oils again in the beginning of the 20th century. In 1929, the iconostasis from the Ascension Church of the Kremlin’s Ascension Convent was placed in the private church. In 1978, the 17th-century painting was uncovered in the central dome of the Church; in 1998, a gilded canopy was constructed above the Altar.

Today, the Church of the Twelve Apostles houses the exposition of the 17th-century icons, made by the most famous icon painters of that time from Moscow and other Russian cities.