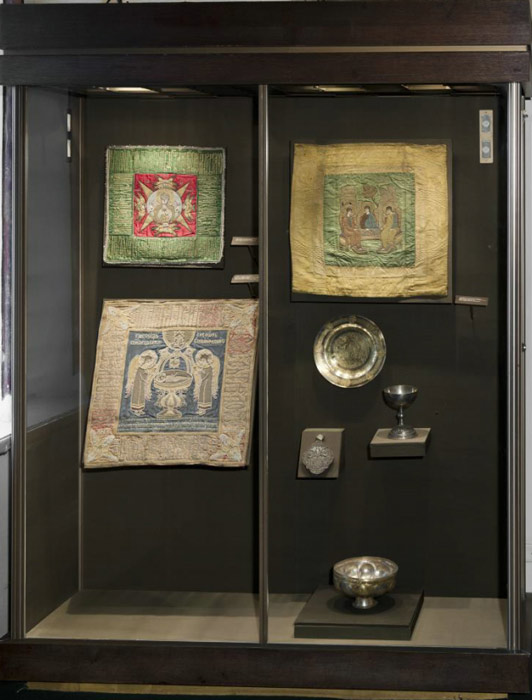 At the end of the 16th - beginning of the 17th century, pictorial embroidery was developing and reached a high artistic level in several workshops. Royal Court embroidery workshops of Ivan the Terrible's time worked most intensively under the guidance of his first wife, Anastasia Romanovna, and the last one, Maria Fyodorovna Nagaya.

The activity of tsar's workshops noticeably revives in the 1580-1590s with the arrival of a new mistress—the wife of Tsar Fyodor Ivanovich, Irina Fyodorovna Godunova. Under the next mistress, the wife of Tsar Boris Godunov, Maria Grigorievna, the embroidery made in royal workshops is characterized by an abundance of pearls, as on the sudarium The Lamb of God (Agnus Dei), presented in the showcase.

The most famous sewing workshops of that time were the needlework chambers (embroidery workshop for women) of boyars Godunov—Dmitry Ivanovich and Boris Fyodorovich. The workshop at Dmitry Godunov's house was headed by his wives, he was married three times. One of the richest and most influential people of his time, Dmitry Ivanovich invested considerable funds in building temples and creating precious church utensils. The main fiefdoms of the Godunovs were in the Kostroma region, and the Godunovs were the main churchwardens of the Kostroma Ipatiev Monastery, where their family burial vault was located. Almost all embroidery works related to Dmitry Ivanovich's name came to the Moscow Kremlin Museums from Kostroma.

The Old Testament Trinity aŃ‘r (cover) presented in the showcase is connected with the period when the workshop was headed by the second wife of Dmitry Ivanovich - Matryona (circa 1589-1594). Gold embroidery prevails in works made during that period. Thus, the sudarium St Trinity, created around 1595, is iconographically close to the famous Andrey Rublev icon The Trinity, with some compositional changes. The style of the drawing with delicate graceful figures testifies to the participation of artists of the capital circle in the work on the sudarium. The sudarium is embroidered with silver and gold threads, which are fixed with coloured silk (fasteners). The image is characterized by the subtle refinement of the colour scheme. The gold clothes of the three angels and delicate body-colour silk, which cover their faces, hands, feet, are combined with brown silk—it delineates the contours of figures and face features of angels. The central part embroidered with gold threads and pearls is perceived as a jewellery piece.

The showcase also presents pieces of the 17th century, associated with various art centres of that time in Russia: chalice and Panagia of Moscow work; holy water bowl—work by Kostroma makers; dish— contribution by Nikita Stroganov to the Annunciation Cathedral of Solvychegodsk. 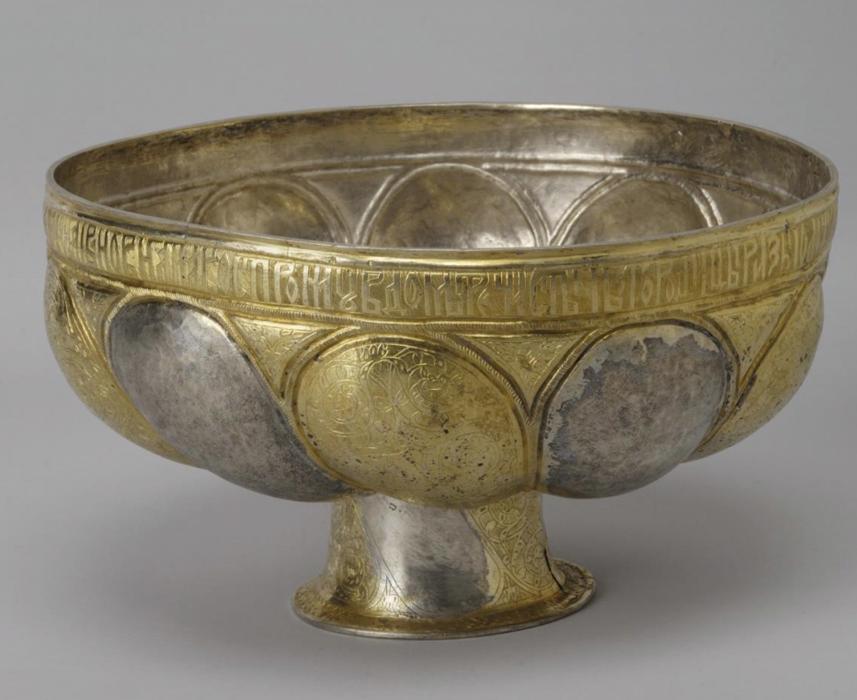 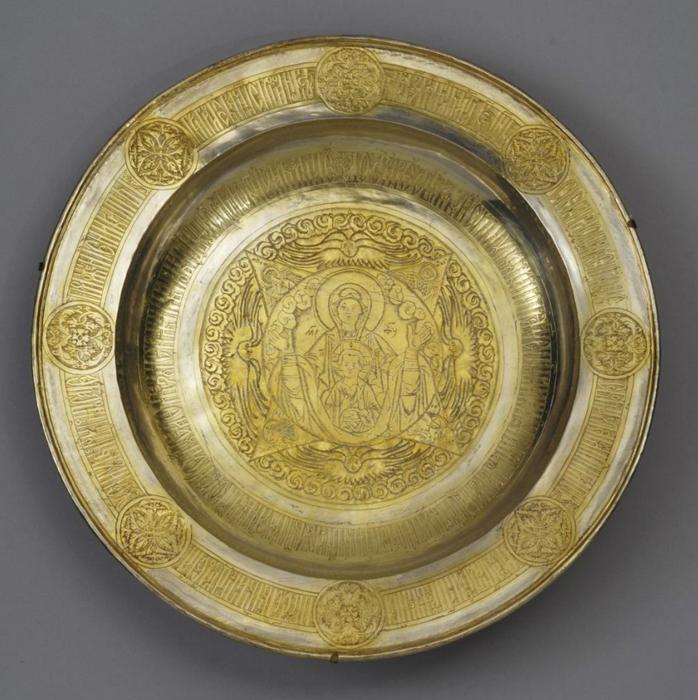 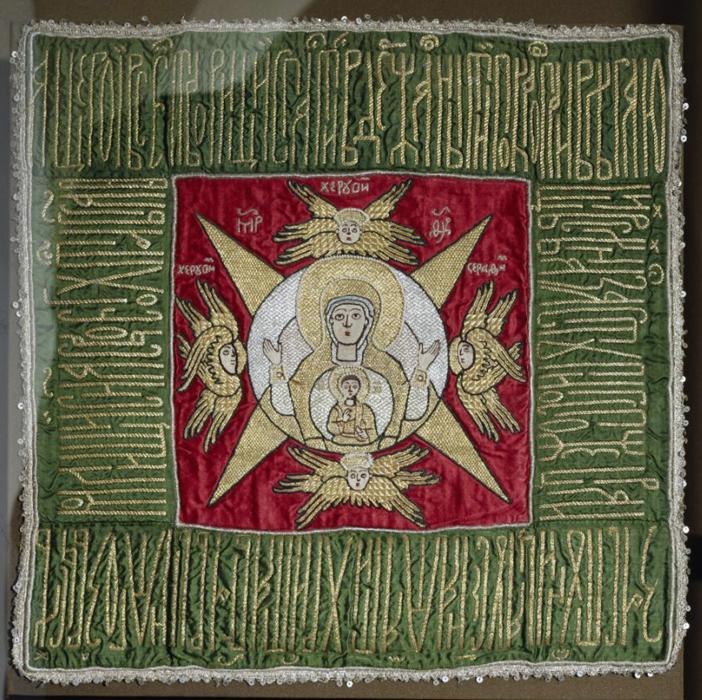 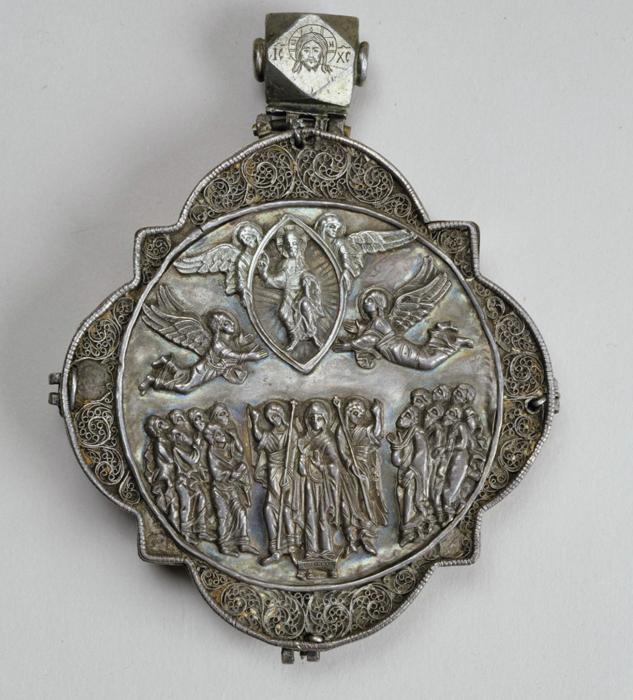 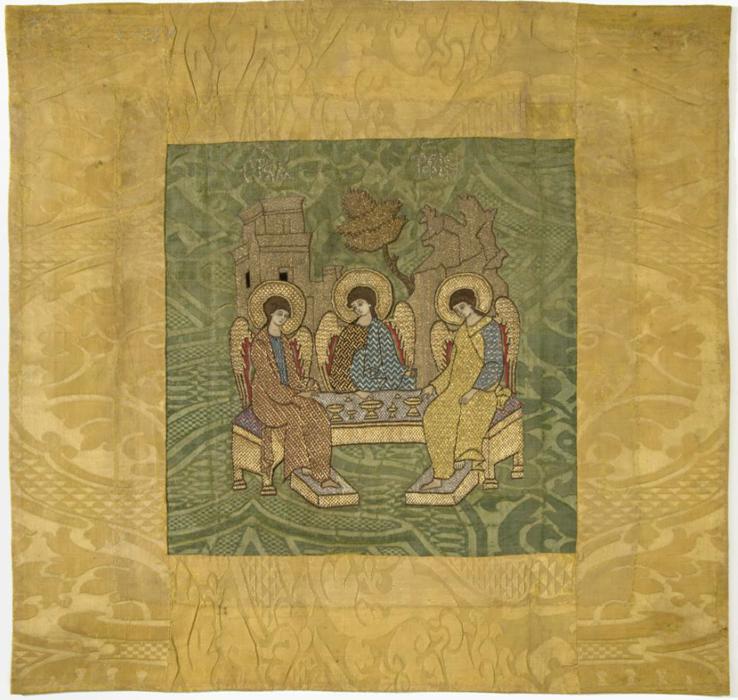